Which Social Media App Has a Ghost As Its Mascot?

0 0 0
Home Social Networks Which Social Media App Has a Ghost As Its Mascot?

Which Social Media App Has a Ghost As Its Mascot?

If the question of which social media app has a ghost as a mascot, revolves around your mind, the answer would definitely be Snapchat.

Snapchat uses a ghost as its social media mascot. Snapchat is one of the most used and most famous social media apps that has emerged to the market with a massive outburst.

With its highly attractive features & cool user-friendly access, it is always in the limelight for another reason as well, its ghost-like social media mascot.

What Is A Social Media Mascot?

A mascot can be any human, animal, object, or imaginary character that represents a certain brand, business, team, community, or places, etc. A mascot is also believed to bring good luck and prosperity to that unit.

These mascots are used by social media platforms as well and some of those are widely popular social media mascot among the users. Mascot branding is becoming a trending feature nowadays.

Whether you have your own social media managing team or some other company that provides social media marketing services to you, considering the mascot value seriously is a must.

How The Mascot Had An Impact On Snapchat?

A mascot is a face of a brand or organization. The most important aspect of a mascot is that it creates your brand identity. A mascot creates an everlasting spot or impression in the audience’s mind.

Although like any brand mascot, the Snapchat ghost mascot doesn’t solely serve the purpose of building brand identity only, it has some other major roles as well. which we will discuss here.

1. The ghost mascot has personified Snapchat. It has created a unique brand identity.

2.  It helped to create a connection with the audience. A mascot helps in increasing engagements.

3. The mascot conveys some messages or history about the particular brand.

Which Social Media App Has A Ghost As Its Mascot? Snapchat is a multimedia messaging app that was developed by the three students of Stanford University and was first launched in the year of 2011.

Snapchat having a special feature than others of displaying a post or snap for a very short period of time before it disappears. This thing gave Snapchat an attractive and engaging user experience and people started liking it a lot.

Now Snapchat is used widely worldwide. With all the attractive features that Snapchat possesses, its ghost-looking social media mascot is definitely the most talked-about subject ever.

Snapchat uses a ghost as its mascot. In the beginning of it’s journey Snapchat came up with a ghost logo that had a tongue sticking out of its mouth, then later on it changed to a faceless logo with just a ghost outline.

The looks have slightly be changed through the years than the first time, but they have kept their trending style. Snapchat now uses a ghost outline with no face/eyes with a yellow background.

The ghost is of white color, just like the one we often see in movies or comics, with a bright yellow color in the background. The color combination of yellow and white and the ghost outline of dark bold black gives it a striking look.

So, if you have thought about the social media app that has a ghost as its social media mascot, then Snapchat is the one.

Snapchat has named its ghost the Ghostface Chillah.

Ghostface Chillah first had a face with small button eyes, a cute little smile, and a pink tongue sticking out from the mouth. It had this style from 2011 to 2013.

Snapchat then changed its face style in 2013 and removed the eyes, mouth, and the tongue. Now it only has the ghost-shaped outline and it perfectly carries the brand image.

What Does The Snapchat Ghost Mean? 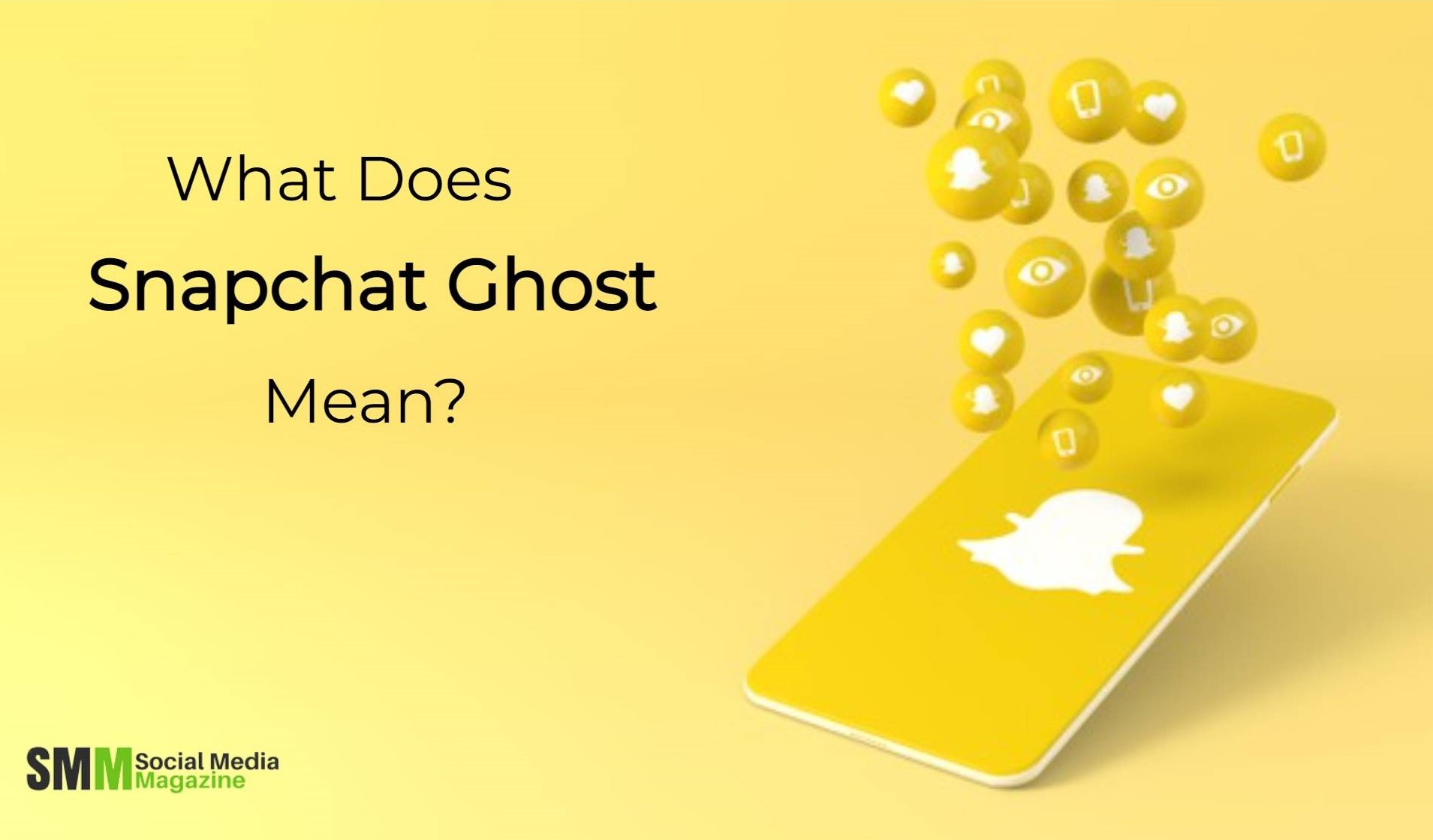 Snapchat ghost doesn’t usually mean anything deeper in the sense. It just gives a funky, cool, user-friendly, or weird look. As social media generally is a platform where people would come to be entertained, this ghost look of Snapchat would make their users feel chilled and happy.

The Snapchat ghost logo is absolutely been able to create that uniqueness among the others, which greatly serves in the positive brand recognition and business success as well.

How To See The Ghost  Mascot In Snapchat?

You can see the Snapchat ghost using the following steps-

Read Also – Can You Be Successful Life Without Social Media?

What Are The Main Purposes Of Snapchat?

Snapchat is widely famous for its ghost logo and its unique features that set it apart from others. Snapchat allows its users to share videos, messages, audio through chats but it is not saved on the site. It disappears as soon as the recipient receives the message.

Snapchat was first launched in the year 2011, and since then it had its graph always high. As per the research made in 2020, Snapchat had around 220 million active users till then. Which makes it one of the biggest social media platforms in the race.

As mentioned above, with millions of active users around the globe, Snapchat is one of the most used platforms today. And its ghost social media mascot definitely makes it unique and helps it stand out from the crowds.

0 0 0
Previous Article6 Skills To Get Dream Social Media Jobs In 2021
Next ArticleIs YouTube Social Media? - Here’s What You Should Know
Comments (0)